Changing diapers whenever possible during the day is one thing. And I get it.

However, babies don’t stop at night either. So should you change the diaper at night? If so, how frequently?

These are some of the most common questions and in this post I’m going to answer them all. 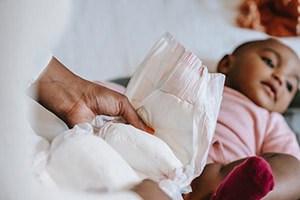 The Rule: Change it as Often as Possible. but for Nighttime…

I would recommend changing diapers as often as possible. However, for nighttime that’s not possible.

What you can do is assess your baby’s condition. If the diaper is too soiled and wet, then you should change it at least once during night time. But if you see the baby is sleeping and the diaper isn’t that wet, leave it as it is.

If you want to get away without changing a single diaper at night, you should look for super absorbent overnight diapers. These diapers are perfect for most heavy wetters.

How to Know When to Change a Diaper at Night?

Most disposable diapers these days have a wetness indicator to judge the condition of the diaper. But until the indicator doesn’t reach its extremity, don’t change the diaper. There’s no point in waking up a sleeping baby.

Another good indicator is your baby’s cry. My baby used to start crying at night when the diaper became wet and I knew it’s time to change the diaper.

What About If  You Use Cloth Diapers Instead of Disposables?

Cloth diapers are more comfortable and in some cases safer than disposable diapers. However, I don’t recommend cloth diapers for nighttime use. Cloth diapers should be changed every 1.5 hours and that’s not possible at nighttime.

If you still want to use cloth diapers, look for super absorbent multi-layer versions available in the market. These diapers won’t match the absorbency of disposable diapers, but are better than normal one layer cloth diapers.

There are tons of diaper hacks you can look up. For nighttime, follow these tips:

Changing nappies at night can be a pain for most moms. However, if you can establish a routine, you will find yourself awake exactly when your baby wakes up for a nighttime feed. You can utilize this interim period for changing the nappies. Once during the night is okay and won’t be a problem for most parents.