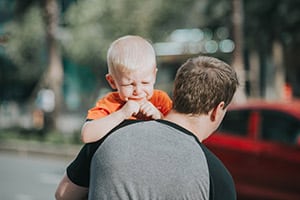 Is your 3 year old’s temper tantrums getting worse?

Trust me, we moms all had to go through this and it can be the worst nightmare, if you don’t know how to handle it.

What’s more frustrating is these 3 year old temper tantrums happen over nothing. So, you really have very little choice to make.

Most parents would either try to counsel their kids or go for extreme measures! Both can fail miserably.

It might seem easy to handle at the beginning. But with time you might lose your patience. From all those years of parenting, I’ve learned quite a lot and this post can surely help you not only to be a better parent, but also to find peace.

Click a link below to jump to the relevant section

What Are Temper Tantrums?

3 year old tantrums are normal. Your child can grow tantrums starting from 1 years up to 6 years. It’s just a part of their mental growth.

Temper tantrums are simply disruptive behaviors that a kid may show when he can’t handle his emotions or unable to express them.

Often aggregated crying, screaming and kicking can be signs of tantrums. Things can turn a little more uglier when your child begins to break stuff or hurt his younger/older siblings.

Why Do Temper Tantrums Happen to Toddlers?

My Personal Experience With Temper Tantrums and What I Learned

With my first kid, it was tough dealing with his temper tantrums. Back then in 2015, I had no ideas that these sudden changes in behavior actually had a term.

It was gentle at the beginning. I wouldn’t pay much attention to them up until his 3rd birthday. My 3 year old’s behavior was going out of control and I really didn’t know what to do.

One instance, he made a big scene at a supermarket when I didn’t buy him a toy. He cried, screamed and started to throw other stuff in the supermarket. I don’t feel proud of it but I had to take extreme measures to make an end to it.

Right then, I thought, it’s enough. I need to go deep and learn about it. I don’t want to become a bad mother.

I tried a number of toddler discipline techniques. Some worked, some didn’t.

At his 3.5 years age, I got to know about tantrums and how they work. What I learned is reactions from your part won’t take you anywhere. Instead be as cool as you can and follow these 7 tips.

Attention acts as a catalyst to your 3 year old’s tantrums to get worse. Instead of solving it, try ignoring it altogether.

Just when you realize, your kid is about to create havoc, prepare yourself. Don’t get emotionally involved with him at this moment. Just take your eyes off him and let him get it out.

Don’t opt for punishment techniques that you think will work. Yes, they might work for a few instances, but will cause more issues in long term.

2. Don’t Bribe or Give False Threats

I tried bribing my first kid at the beginning stages. It worked and I was happy… but just for a few days.

For example, your kid wants to go out. But you say, if you stay home, I will bring chocolates for you. He might stop crying. However, these little bribes can end up becoming bigger bribes. And..when you can’t provide the bribes, their behavior will become even worse.

The same goes for threats. Don’t make unnecessary threats. It will either make them fearful of you or won’t work at all after some time.

Did you know you can avoid those terrible 3 year old tantrum moments?

Well, not all of them but whatever you can avoid will surely help.

Do a 1-week study on your kid. When does he start screaming? What makes the tantrums worse? What time of the day it is and stuff like that.

So, you might find that he starts screaming frequently when it’s 2 pm. Chances are he is hungry. You can avoid his tantrums simply feeding him a little earlier.

With this technique I was able to list and avoid at least 5 different tantrum moments.

4. Isolation Without Any Emotions

The isolation technique is a true and tested method that works for all parents.

Though it’s fairly simple to execute, most parents get it wrong.

So, here’s what you need to do.

when your child begins to throw tantrums, get him to a room and lock him up. Let him know, you will let him out if he’s willing to calm down.

Here’s the trick. During the whole process, don’t talk much or show any kind of emotions like caring, shouting, threatening or anything at all. This is the time you become a robot.

Oftentimes, distracting your child to something else can do the job.

For example, the child might be crying to get a new toy. Without focusing on his problem, start talking about something else. You can tell “look there’s a bird outside”, “look your dad is waiting to play with you”.

This technique works 1 out of 3 times. That’s not bad after all.

You can also distract your kid with a positive tone and redirect him to what you say.

Show some energy and say things like “hey baby, where’s your chocolate”, “hey! Look how beautiful you are looking today” or, “hey honey. This dress looks nice on you. Who bought it for you?”

The trick here is to never talk about the issue he is facing. If you give attention to what he is doing, it doesn’t work.

Severe temper tantrums in 3 year olds can be hard to handle. You will start running out of tricks at some point.

The 1 2 3 magic technique developed by Thomas W. Phelan is a simple and ingenious way to stop/prevent tantrums even if the case is severe.

It works like this. Just when you know your kid is about to throw tantrums, tell him if he doesn’t stop, he will face a consequence.

This isn’t a threat and doesn’t show anger or any sort of emotions.

Start counting, 1, 2 and 3. When he doesn’t stop reaching at 3, apply the consequence. This could be not giving your child any chocolates for the entire day or isolating him.

The trick here is sticking to what you said and follow it. So, your child will know you will do what you say.

After a few tries, he will stop at 2 and the tantrums can be controlled in this way.

You can read the 1 2 3 magic book for more details. For now, here’s a video you can follow.

How to Cope With Tantrums

Your 3 year old toddler isn’t any different from other 3 year olds. Temper tantrums are bound to happen, some show less and some a bit more. You just have to learn to deal with it, rather than trying to enforce something. These 7 techniques should be enough to give you some peace in those chaotic moments.